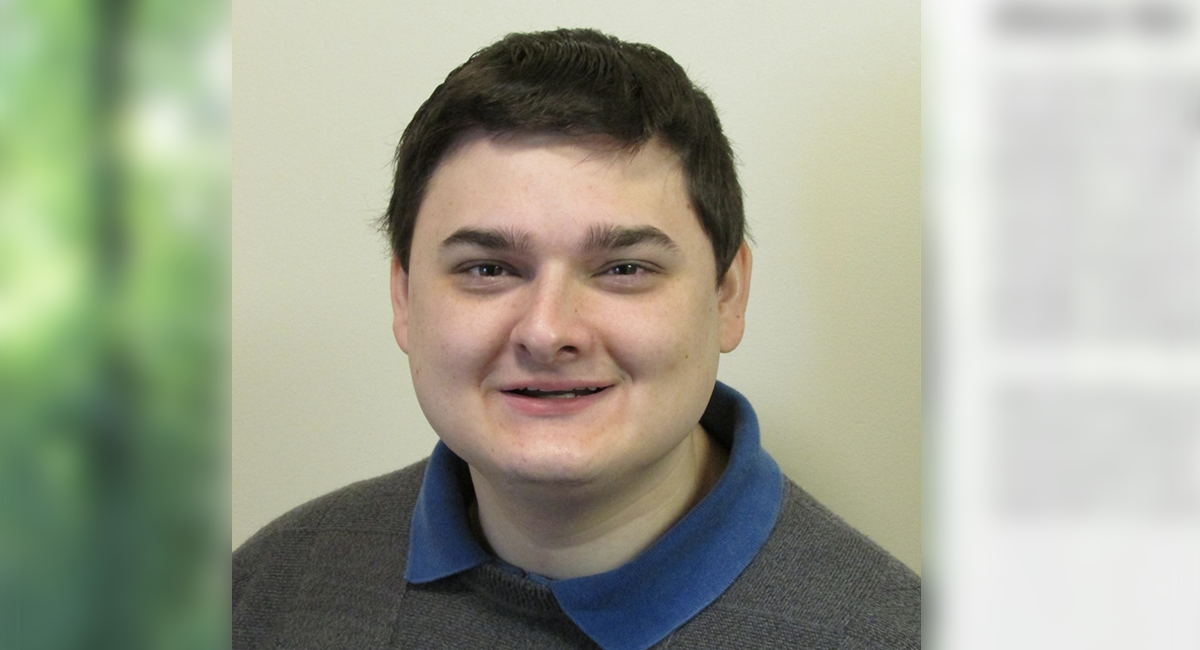 Andy Rock, a CIP 2016-2017 alumnus, has just been awarded a Master's Degree in Geology from SUNY at Buffalo.

Growing up, Andy always had a keen interest in the field of geology. He was raised in Poughkeepsie, New York and has loved to be out in nature, study outer space and history, play Dungeons and Dragons, and spend time with his family since he was young. Andy’s best subjects in high school and as an undergraduate included math, science, and history. After high school, Andy earned a bachelor’s degree at Vassar College, majoring in earth science, while living at home with his parents.  Andy graduated from Vassar in 2013. He continued his studies after graduation, shoring up his physics background, and did volunteer work as a lab assistant at Vassar, but employment eluded him.

In 2015, he went to an agency in New York that helps individuals with disabilities find and retain employment.  After a few months of employment counseling, they held a practice interview. Andy was completely unprepared to answer the typical open-ended "tell me about yourself" question, a type of question that can be especially tough for individuals with Asperger's Syndrome like Andy. With his confidence already low, Andy fell apart. According to Andy and his mother, the agency decided he was not employable. His case was closed in March 2016, and he received a letter encouraging him to apply for SSI rather than pursue working.

Andy wouldn't take no for an answer. With continued strong interests in the areas of earthquakes and volcanology, Andy decided he wanted to earn a masters degree in geology. He decided to apply to The University at Buffalo’s (SUNYAB) geology masters program.  He was accepted, and he was thrilled. But he was nervous about living away from home.

Andy decided to defer graduate school and attend CIP Berkshire, a national transition program for young adults with autism and other learning differences. At CIP, he had the opportunity to polish his social and independent living skills before heading off to graduate school. This was the first time Andy ever lived away from home.

“Without CIP, I would not have made it through graduate school,” Andy commented. "Learning how to live independently in an environment where people support you makes a big difference.”

At CIP, Andy feels he also learned how to take better care of himself. He learned to live on a budget, open a checking account, clean his apartment, do laundry, and get along with roommates. He planned meals, shopped for groceries, and cooked. He took care of his car. He did an internship with the Massachusetts Geological Survey and refreshed his calculus skills at Berkshire Community College. He participated in volunteer projects at Habitat for Humanity and other community organizations. He gradually took over managing his own medications with support, so that near the end of the year, he used his own lockbox and took over entirely. He made friends and started a Dungeons & Dragons club. He enjoyed hikes and continued to pursue his passion for nature photography.

Andy's mom, Jenny Arden, was amazed at the transformation. "I had been a helicopter mom. When Andy started at CIP, I chafed at not being allowed to visit right away. I wanted to take care of my baby. But CIP allowed both of us to cut the apron strings, and transformed our whole family dynamic."

When his mom visited, Andy apologized he had not dusted and said he had a meatloaf in the freezer. She was stunned to see him managing so well without her.  By the end of the year, Andy was confident he was ready to head off to Buffalo in the fall of 2017.

“Andy is a thoughtful, kind and exemplary man who loves puns, and has successfully set and reached numerous key life goals. During his time at CIP Berkshire, among other things, he made his mark as a Dungeon Master in weekly sessions with fellow CIP students; he consistently showed himself to be a hard worker, and he shared his dry sense of humor with many,” noted CIP Berkshire academic coordinator Judy Gerich.

After attending CIP, Andy ended his deferment and moved to the Buffalo area in the summer of 2017 to enable him to be a full-time graduate student at The University at Buffalo. He had his own apartment on campus. He did hire a life coach, former CIP wellness director Cindy Minnich, who kept him on track with brief meetings a few times a week.  He also maintained appointments with a therapist for counseling. But he required no other academic or life skills supports. Andy also had relatives in the area for a safety net. He successfully completed his masters in geology with a certificate in professional science management on February 1, 2019.

Andy has moved home to Poughkeepsie, but at 27, he is an independent adult. His mom noted, "He cooks once or twice a week, from scratch, and does things like buy rock salt for the driveway when he sees we are low, without being asked. He continues to help with shopping, laundry, and cleaning. He manages his own doctor's appointments and financial affairs." Andy holds a masters degree in a field he is passionate about. He is currently looking for employment in the field of environmental conservation or geology-based work in the greater Poughkeepsie area.

Andy still has challenges. He would like to make more friends, and hopes to have a job with benefits, his own home, and (some day) a family. But those things are now real possibilities instead of dreams. His mom says, "CIP taught life skills, social skills, and executive functioning, but what Andy got was confidence and determination."

Andy looks forward to working in his field and visiting friends at CIP Berkshire when his schedule allows. You can see his e-portfolio online here.

Where Are They Now? Alumni Spotlight: Paul Morris
Taking a Look Back at Challenges and Successes of 2020
How Social Determinants Affect Young Adults with Autism and LD
CIP Berkshire Alum in the News
Social Share