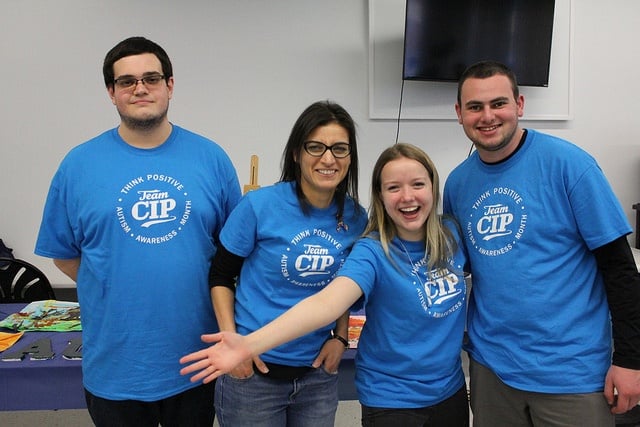 CIP Berkshire kicked off Autism Awareness month by decorating our center with blue balloons, an informational table, and autism awareness ribbons for people to wear.

On Friday, April 7th, CIP staff and students joined forces with other local organizations to hold an Autism Awareness Celebration. We all wore our blue Team CIP t-shirts and students entertained the audience with musical performances and an art show highlighting their beautiful and creative talents.

On Friday, April 21st, CIP Berkshire hosted the first Autism Awareness Film Festival. The festival featured the premiere showing of an original film created by current students at CIP Berkshire under the direction of film teacher, Patrick Toole. The festival also showcased two other studen films. The second screening of the night was the highly acclaimed "Autism in Love" documentary by Matt Fuller. This film offered a "warm and stereotype shattering look at four people as they pursue and manage romantic relationships."

On Friday, April 28th, staff and students wearing the CIP team t-shirts participated in an Autism Awareness rally in Pittsfield, MA. Students and staff held signs and “lit it up blue” to bring awareness to autism. CIP was joined by other local organizations to make this event a success!

Overall, we had a successful month of bringing awareness to others, collaborating with other local organizations, giving back to the community and supporting a cause that is important to the CIP family.