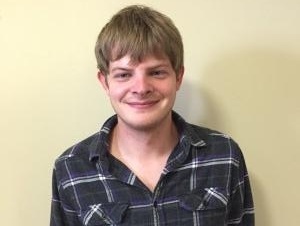 Originally from South Africa, Austin came to CIP Berkshire Center in the Fall 2012 semester to pursue a certification in Human Services. Austin is finishing his last semester at Berkshire Community College with a cumulative internship at the Ralph J. Froio Senior Center working with patients with dementia.

Austin is a leader in the CIP community. Throughout his time at CIP, Austin was a Student Ambassador, a student Resident Advisor and held different internships through the Career Department. He is regarded by his friends and community as a kind-hearted person who thinks about others.

Staff member Mike Cornellier states, “Austin is a highly motivated student. He is very receptive to constructive criticism, and works hard to take it in, and build on it. He takes personal pride and ownership of being a role-model for his peers. Austin is appreciative of staff's assistance and interests in helping build toward his future goals as well as his future self.”

Austin has diverse interests including playing tennis, hanging with good friends, history, genealogy, and a curiosity for human interests. Austin is also affiliated with groups in the greater Berkshire community including the Greater Grace Church, a local non-denominational church and a local tennis league.

When Austin reflects back on what he has learned at CIP, Austin states “I have learned about differences and recognized new things about myself. I am grateful and thankful for the positive things in my life as a result of meeting new people who have their own experiences. I have been able to learn from them.”